CloudWave was presented the Above and Beyond Award by the Texas division of the Employer Support of the Guard and Reserve (ESGR) this week.  This award recognizes employers at the local level who have gone above and beyond the legal requirements of the Uniformed Services Employment and Reemployment Rights Act by providing their Guard and Reserve employees additional, non-mandated benefits.

CloudWave was nominated by U.S. Air Force Reservist Chief Master Sergeant Andrew Branning, the Director of the Project Management Office and Quality at CloudWave. Chief Branning has been in the U.S. Air Force for over 27 years, with 7 years of active duty and more than 20 years in the Reserve. When Andrew returned from a recent overseas deployment, he successfully nominated Mark Middleton, Vice President of Cloud Services & Chief Quality Officer, for the Patriot Award, and CloudWave for the Pro Patria Award in recognition and appreciation of the support he has received.

“CloudWave has been very supportive and has enabled me to fulfill the commitment I’ve made to the Air Force Reserves. In addition to offering flexibility in my schedule to accommodate my military service, they continued to provide benefits and made up the difference in salary between my civilian position and military position. This support makes it possible for me to both put my skills to work for CloudWave and serve my country.” said Andrew.

During his recent deployment, Chief Branning distinguished himself by outstanding achievement as Noncommissioned Officer in Charge of the 386th Air Expeditionary Wing Command Section. As the Wing Command Chief’s key advisor, he seamlessly organized more than 400 events and distinguished visitor engagements, developed procedures, and singlehandedly administered the wing’s awards and promotion program.  Chief Branning’s accomplishments resulted in the award of a Meritorious Service Medal. 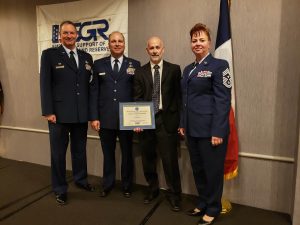 Any cookies that may not be particularly necessary for the website to function and is used specifically to collect user personal data via analytics, ads, other embedded contents are termed as non-necessary cookies. It is mandatory to procure user consent prior to running these cookies on your website.

Save & Accept
Powered by CookieYes