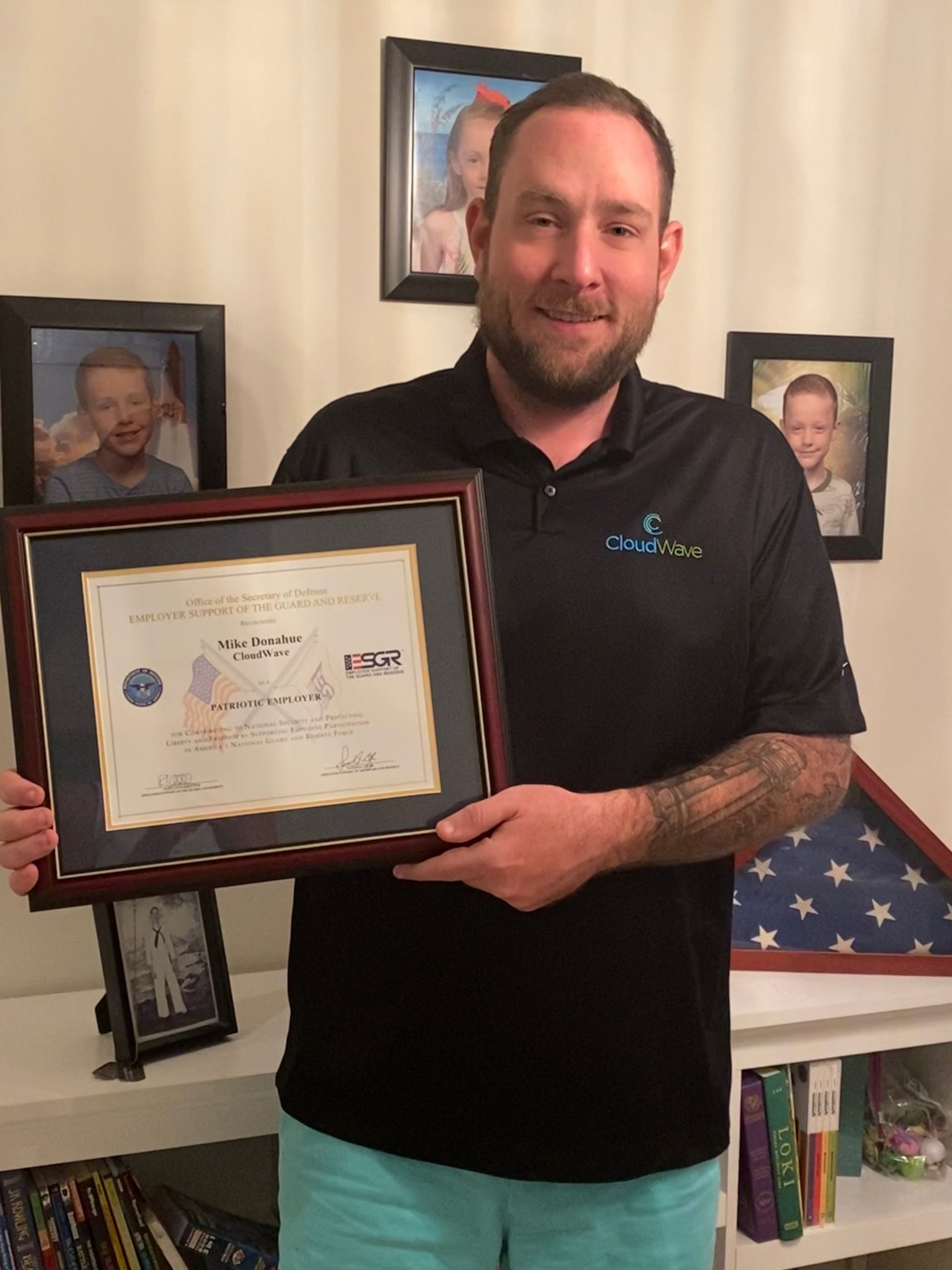 Pictured with his ESGR Patriotic Employer Award is Mike Donahue, Director of Sales Engineering at CloudWave.

U.S. Air Force Guard member Osmandy Polanco is a Technical Consultant at CloudWave.  Airman Polanco recently returned from a stateside mission and nominated his then direct supervisor, Mike Donahue at CloudWave, for the Patriot Award.

The Patriot Award is established through the Employer Support of the Guard and Reserve (ESGR), a Department of Defense program. The Award allows citizen warriors to recognize supervisors and managers for direct support, including flexible schedules, time off prior to and after deployment, caring for families, and granting leaves of absence if needed.

Airman Polanco commented on why he wanted to recognize Mike Donahue for the support he receives as an active Reservist. “During my tenure at CloudWave, Mike Donahue has been supportive in every step. He has help me advance my technical knowledge and has challenged me to grow beyond my comfort zone, which has showed me that I am capable of more than I believed.”

Airman Polanco went on to say, “Mike also supported and encouraged me when I showed interest in joining the Rhode Island Air National Guard.  During my time leading to basic training and technical training, he made sure I had enough time to prepare for my military training without interfering with my day to day operations. After my return from military training, Mike advocated for additional career enhancement due to the knowledge and skills I gained during training.  Although I received support from the entire CloudWave organization, I would like to recognize Mike Donahue for his support of both my civilian career and military career.”

Airman Polanco has been in the U.S. Air Force for over a year.

“It’s an honor to receive the Patriot Award.”, Mike Donahue said. “It’s important that we support our active and reserve military personnel to make it possible for them to serve our country while maintaining their roles as civilian employees. This is something I, and the CloudWave organization, are strongly committed to. We value Ozzy’s contributions, and I personally was motivated to support Ozzy throughout this process. As a rising star within the organization he stepped forward and began a selfless journey to serve his country.”

During his recent deployment, Airman Polanco successfully completed his on the job training for his career field (3D053- Cyber Surety). During this time Airman Polanco also participated in an annual exercise with the Rhode Island Air National Guard 282nd Combat Communication Squadron.